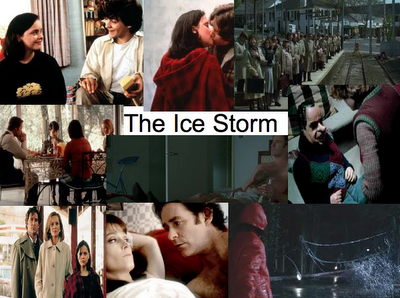 "When you think about it, it's not easy to keep from just wandering out of life."
When it comes time to write a review for a film, I often read what other critics and bloggers have wrote just to remind me of what I watched as well as generate some ideas about how to analytically approach something. Usually if I don't do this, then my scatter-brain tends to forget a few details here and there and my response to a film comes up rather short. As you can tell from looking at this series, some films from East Asian Directors, I had a ton of thoughts on while others just had a few ideas pop up into my head. Maybe I should start taking notes during a movie. I only say this because I was completely blindsided by The Ice Storm and come up with little to say. I've waited about an hour after finishing it and I'm still too overwhelmed with emotion to really offer up any sentiments other than, "damn, that was good." The story is just so deep and is overall a very thematic piece of film with some of the best characters and acting I've seen. Similar to when I first saw Schindler's List or more recently Black Swan, I'm just so overwrought with my response to the film that I already know it's the feeling I get when I've seen something that belongs at the top of any list of favorite films I ever make.
Hopefully, if anyone isn't familiar with the premise, me just talking about the characters should get you interested. Set in 1970's suburban Connecticut, Ben and Elena Hood (Kevin Kline and Joan Allen) are a couple that have some problems to work out. Their marriage has simply lost its spice and they haven't bothered reconnecting with each other that much. They have a son named Paul (Tobey Maguire) who goes to college and he is trying to start a relationship with Libbets Casey (Katie Holmes), but Paul's friend Francis (David Krumholtz) keeps getting in the way. Ben and Elena also have a daughter named Wendy (Christina Ricci) who is still in high school and has begun to seriously sexually experiment with the 'same-age-as-her' neighbor, Mikey Carver (Elijah Wood). Mikey is the oldest of two boys in the Carver family and is the son of Jim and Janey (Jamey Sheridan and Sigourney Weaver). Janey is also carrying on an affair with Ben, and Elena is starting to suspect something. Two events happen in the middle of the film that sends these characters to emotional extremes. First, there is an ice storm. Second, the adults all find themselves at a key party thrown by neighbor Dot Halford (Allison Janney).
So what is the film ultimately about? The answer would be family and sex. The 1970's are shown and known to be a time period where values in both were changing. Director Ang Lee and writer James Schamus know how to tell a story and get some deep themes across while still holding our interest with these characters. Speaking of, these characters just want to feel. They hunger for an alternative to their lives and seek feelings both new and old just so they can recognize themselves as human beings. This applies to every character from these two families- Ben, Elena, Jim, Janey, Paul, Wendy, Mikey, and Sandy. I'd also say that the performances from each of the actors ranks as some of their best work. I give props to the head of the cast, Kevin Kline, whose acting I'm starting to become obsessed with because of the dedication he gives to embody his roles.
There is a scene at the end where the Hood family goes to pick up Paul at the train station and they all get into the car. After the events of the ice storm the night before, Ben just begins to cry as his family looks on... and the movie ends. It's a fitting ending once you see what gets you there. It's almost too powerful for any words that I could come up with to express about the film. To sum up my thoughts, this film is raw, emotionally raw. Just the way I'd prefer it to be.
Posted by Andrew DiDonato at 8:51 PM