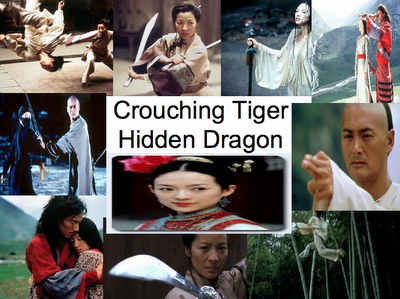 "A faithful heart makes wishes come true."
To recap- I've found myself doing an about face on most of the films I've undertaken in my marathon. Mainly thanks to a modern Asian film class I took at my college, I've allowed myself to sort of come to an understanding of the small differences in national cinemas that initially turned me off.
After watching Joint Security Area and Sympathy for Lady Vengeance, I've come to really respect Park Chan-wook and the risks he takes. After watching Not One Less and Raise the Red Lantern, I've learned to just sit back and enjoy the beauty in the work of Zhang Yimou. I was completely off-base on my impression of Wong Kar-wai as I just didn't really "get" his art-house sensibilities, but I've come to love and re-watch his work (In the Mood for Love) after enjoying Chungking Express and Happy Together. John Woo... well, I've always been a fan of his bloody operas.
With Ang Lee, I had only seen and liked Brokeback Mountain, Sense and Sensibility, Ride with the Devil, and Taking Woodstock (it was okay, in retrospect). I really respect his body of work and I hope to enjoy his earlier Taiwanese films should I ever decide to watch them. The Ice Storm was a phenomenal experience and I hoped it would be repeated with Crouching Tiger Hidden Dragon. I was hoping for Lee to take what I had come to dig in Hero and House of Flying Daggers (the only other wuxia films I had seen, both from Zhang Yimou) and add that level of psychological and emotional depth that one can find in practically all of his work (even in his failed attempt with Hulk). Actually, I find CTHD to be a tad overrated. Or perhaps I'm just not "getting it" like I didn't at first with Zhang, Wong, or Park.
That energy that Lee puts into his films is definitely present. The cinematography and the choreography would place the film high up on a list of the most beautifully constructed films I've seen. From the scene where Michelle Yeoh runs up a wall to where Zhang Ziyi and Chow Yun-fat balance on tree branches, everything looks fantastic. I feel kind of spoiled since Zhang created these fantastic color palettes for sections of his wuxia films, but Lee's feel less artful and just more real and perhaps even gritty would be the word I'm looking for.
Now, I understand that plots for wuxia films aren't always the most down-to-Earth with gravity and physics often being defied, but this plot was just too far fetched for me. I was hoping that a majority of the film would be a protagonist facing off against an antagonist like in most martial arts-related films I've seen, but that takes a back seat. Instead Lee has us look at the personalities of these characters. A commendable effort, but after a while I grew tired of the looking around inside their heads. The film didn't need that long flashback in the middle and it absolutely didn't need half of the supporting characters that wandered about aimlessly. There was some human elements present during such a spectacular story, but I just felt it wasn't strong enough. I was more intrigued by the fighting than I was about whether Jen would finally side with the other characters. The film almost felt typical once you remove all of the stunt-work.
Posted by Andrew DiDonato at 9:13 PM