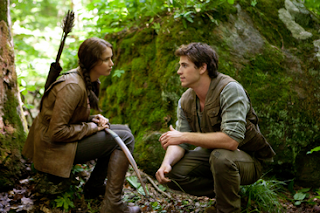 In the world of The Hunger Games, a nation known as Panem is made out of a city designated the Capitol and is surrounded by twelve poorer districts. As punishment for the poor's uprising against the elite, the Capitol demands that each district send a young boy and girl to compete in gladatorial combat known as the Hunger Games. The arena is a completely controlled portion of the wilderness with traps that are broadcasted to the nation as reality television. Reality TV, oppression, heroism... this all leads to one of the most thrilling and original creations that was first written as a novel by Suzanne Collins and has now been adapted by director Gary Ross (Seabiscuit, Pleasantville) into a highly unique movie both in its visuals and moral complexity.

Katniss Everdeen (Jennifer Lawrence) from District 12 volunteers to go in the place of her much younger sister. Lawrence previously played a protective sister who has to fend for herself while protecting her disadvantaged family in her Oscar-nominated role in Winter's Bone. She is a perfect fit as Katniss in that she captures a girl who is strong, but sometimes unaware of her strength. Katniss knows she has the heart to match her tomboyish intensity, but with such hopeless circumstances, even she is becoming doubtful and perhaps bitter. Thankfully the film does a great job of communicating the two things necessary to really attach us to this character. First, we come to see and understand how corrupt and wrong the future of this world can be. Second, we come to see the believable transformation of a girl into a warrior in another gravitating performance by Lawrence.

Katniss is paired with Peeta Mellark (Josh Hutcherson). Peeta is interesting in that he can be a rough fighter who isn't completely unaware of the dreadful atmosphere of these games, but he also understands the politics and perhaps even the sacrifice that will have to be made to win. Pairing him with Katniss creates a dynamic that helps carry the film from its haunting battle scenes all the way to the final frame. And "haunting" is the absolute right word. The film's battle sequences showcase the brutality when need be, but some of the imagery is left up to the viewer's imagination with the proper cinematography and editing. The choice of Tom Stern's cinematography as well as Ross and his production designer and art director's choices for this film are all very risky, but I think they pulled it off. The costumes of the elite for example work perfectly as parody while the close-up handheld camera-work doesn't disorient, but places me in a state of suspense (I might be alone in that sentiment).

Along with a great supporting cast (of the likes of Woody Harrelson, Elizabeth Banks, Liam Hemsworth, Stanley Tucci, Donald Sutherland, Lenny Kravitz, and Wes Bentley), The Hunger Games was a surprising triumph that I encourage everyone to give a chance no matter what preconceptions they might have as a reader of the book or as someone who just might've caught a glimpse and were unsure of what to make of it.
Posted by Andrew DiDonato at 12:56 PM