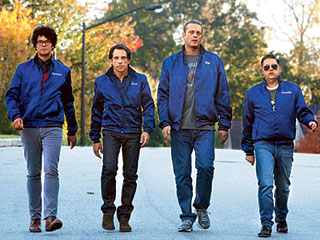 Some comedies have such outrageous premises, that a viewer can be turned off only to discover that if the material is handled with care, the result is hilarious. That seems to be why Ted was the "it" comedy movie of the summer. Teddy bear comes to live... that might be a movie I avoid. MacFarlane managed to really approach the film with such enthusiasm that he created something genuinely unique. Not so much the case for The Watch. The unique concept is that a neighborhood watch committee that often deals with petty crime, find themselves face-to-face with an alien invasion in small-town America. Great idea, but poor execution.

The script by Evan Goldberg, Seth Rogen, and Jared Stern, takes the safe and typical route of having generic set-ups that seem to only be "enhanced" by the occasional dick or sex joke. This movie is the glaringly cliche scenario of "bunch of mismatched characters have to work together to get along and solve a problem and they each learn a lesson". Each character turns out to be a blatantly obvious buddy-comedy archetype that is suited to each of the individual actors' careers. Vince Vaughn's character is loud. Ben Stiller is the voice of reason. There is a twist involving Richard Ayoade that doesn't matter whether you see it coming or not, because has little to no effect on the film other then setting up the battle royale finale (fans of BBC programming will recognize the actor from Chris O'Dowd's show "The IT Crowd" but he is also an up-and-coming writer/director of comedy-dramas). Jonah Hill is tasked with playing a sociopath and nothing about his scenes or dialogue ever really clicks with the film. In fact, his brand of dirty-humored fish-out-of-water roles from films such as Superbad or Get Him to the Greek would've actually been a welcome addition to this group (see him in 21 Jump Street for a recent fantastic comedic performance).

There are a bunch of subplots in the movie, but like I was saying about the twist involving Ayoade's member of the watch, it all just strings the movie together to get the viewer from start to finish, but there is only that energy without any inspiring choices being made past that. Akiva Schaffer seems to struggle a bit with some wild cinematographic choices, but he and the cast do their best to at least get a few laughs here and there. There are enough small one-liners and situations to make this somewhat passable, but the movie is ultimately a lost opportunity as it amounts to a bunch of randomly connected scenes with the f-word being shouted on occasion.
Posted by Andrew DiDonato at 5:55 PM