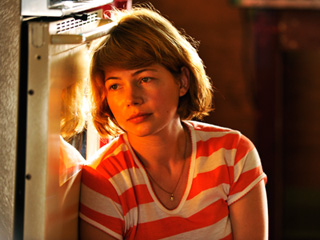 There are several scenes towards the beginning of Take This Waltz where the (temporarily) happily married Margot (Michelle Williams) and Lou (Seth Rogen) are talking to each other like infants. They are rolling around in bed with each other or Margot might just walk up behind Lou while he is cooking chicken and they start talking like "'widdl'e babies". The scene repeats several times and that usually leads to them rubbing each others' noses, hugging, kissing, etc. or they have this routine where they romantically talk about how they are going to kill each other.

Words really can't do the moments any justice. Sure, the common reaction is "what the fuck?", but something that the movie makes clear (and why I'm bringing up those scenes at the beginning of my response) is that Take This Waltz is an extremely intimate and personal movie. It captures moments that  a large-scale romance might miss out on. We are in the home of these two people's lives and they're certainly unique people, but the moments that might sound odd or silly are just two moments that are meant to be lovingly private between two people who deeply care for each other. That is what makes the film a romantic fantasy. A Sarah Polley version of a Wes Anderson movie for the sake of a comparison (don't ask why, but I could swear the sitting-in-a-wheelchair-in-the-airport bit would work great with Anderson or perhaps Jason Reitman).

Like with her first film, "Away From Her", Polley is concerned with capturing a realism that still has a sense of the unexpected to it. She lets the film move slowly and have the fantastical and romantic elements of the story be representative in the locations and characters. The walls of Margot and Lou's home are yellow with a ton of pots, pans, and pictures hanging around. The other major character of the film, Daniel (Luke Kirby), has a white art-studio with wooden rickshaws lying about. There is a sense of romance in these elements, but there is also a sense of characterization and conscience decisions that add to one of the most unique films of the year and I haven't even gotten to the plot yet...

Take This Waltz could very well have been a movie about infidelity that took the route of say "Little Children", "Unfaithful", or for the sake of the ultimate exageration, "Fatal Attraction". Those movies are about characters who are in situations they find so displeasing that they look for an alternative to fill their hunger for something different. Margot has it perfect. In fact, she is a woman who is choosing to cheat on her perfect husband. Sure he has a few things that can annoy the average person, but she is choosing to go see what it's like to be with another man at first as a friend and then perhaps as something more. The thing is, Daniel is also very perfect.

Rogen is at his best and Kirby provides what I found to be the acting revelation/discovery of the year in how they both managed to balance charm with trustworthiness of both Margot and the audience. Williams once again demonstrates her general prowess in capturing the viewer with a natural talent for disappearing into her role completely. Wendy and Lucy, Blue Valentine, My Week with Marilyn, and now this... Williams is somehow able to keep an audience on her side while her character might not always be making the best of decisions

Afterall, Margot is somewhat vague in her motivations. Then again, so are many people in real life. Sure there are all of these quirks and idiosyncrasies to the folks and locales of Polley's suburban Toronto, but the film moves along at such a leisurely pace dicated by its characters, that after a while the viewer begins to feel like a fly on the wall. You stop wondering and questioning "who, what, where, when, and why" and instead you are watching people that anyone who has "lived a little" would recognize.

As for the ending... Williams is up there with Javier Bardem, Naomi Watts, Tony Leung, and so many other performers alive and long-gone, that can tell an entire story with just her face. When Margot's world begins to spin a bit faster at the end of the film (literally and figuratively), she smiles and then frowns. She looks upset and then overjoyed. Take This Waltz is about relationships and in one single shot and in one single scene, Margot's face explains what being in one can mean to many people at a given moment.
Posted by Andrew DiDonato at 11:42 PM