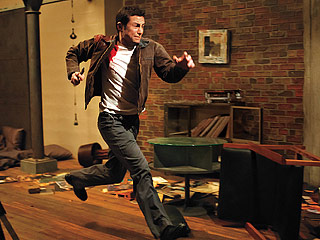 Most of "Looper" takes place in 2044. It's a recognizable future. Some vehicles can float a little off the ground, but there are cities with slummy nightclubs and rural farmhouses located the next exit after a diner. Even when the film moves to 2074, this is not the foreign worlds of Star Wars or Avatar, it's just typical ol' Earth. That is part of the ingenuity of the film- having this familiar environment for a science-fiction film "about" time travel. I say "about" because time travel is nothing more than an item that is discussed for some of the film. "Looper" is like many a mainstream film in that it has a three-act structure with an introduction, confrontations leading to a climax, and a conclusion. The nature of time-travel is actually just a backdrop to a character-driven story about second chances, sense of purpose, and even the cycle of violence.

Joe (Joseph Gordon-Levitt) is a killer who works for the mob in Kansas, led by Abe (Jeff Daniels). Abe came from the future and uses these killers, called loopers, to eliminate enemies of the organization as a way to be sure to dispose of the bodies. The mob sends someone back in time like they did with Abe, only there is usually a looper with a gun waiting to kill the target. Like with his previous two films, writer/director Rian Johnson comes up with an already unique concept and then throws the proverbial wrench into the mix. "Brick" was a high-school noir that became complicated and "The Brothers Bloom" was a con-man movie that developed into a puzzle. "Looper" asks the fun sci-fi'ey question of "what if you met yourself from the future, what you do and say to each other?" Although, for Johnson's unique creation of a future Earth, his question becomes "what if you suddenly found yourself having to kill your future self who was just sent back in time and what would you then do and say to each other?"

Future Joe is played by Bruce Willis in a stroke of casting that was made-to-be. Willis is certainly the action-icon, but more so than his costars from say The Expendables, Willis ventures into a variety of other genres and film-types. He managed to find a great collaborator in Wes Anderson on Moonrise Kingdom, but next year he has sequels to franchises G.I. Joe, Die Hard, and Red. The man is massively talented whether he is carrying a blockbuster like Die Hard or an intimate drama like The Sixth Sense. Here, for a movie where he plays the "older" main character, Willis brings his experience as a seasoned veteran of such high-concept films (Twelve Monkeys and Unbreakable come to mind among others). There is a scene where future Joe finds himself having to hurt a child in order to complete his mission that he went into the past to fufill. The range that Willis brings to that scene involves some of the most powerful and emotive performing that he's done in a long time. It wouldn't be a stretch to rank this as one of if not his best performance.

The cast is also joined by Emily Blunt as young Joe's love interest and like Gordon-Levitt, Blunt has been enjoying a wave of successful roles. Blunt plays a mother of a boy who is central to the film universe's mythos. Pierce Gagnon, age 7, plays the young kid and it's incredible how he holds his own and delivers a truly creepy and heartfelt performance. The kind of 'Christian Bale in Empire of the Sun' type of performance where you wonder where this kid will be many years from now in his acting career. It's a testament to Johnson's mind-game riddled screenplay that having a child character and a romantic subplot thrown into a sci-fi thriller manages to somehow add and not annoy audiences or detract from the film's impact.

The film becomes a brain teaser right at the end, but it doesn't matter if you don't get it. You as the audience member will probably be caught up in what the film is saying about the truths of humanity even if you don't realize or verbalize your response. "Looper" says a lot about the decisions one can make and like a movie that I'll talk about several days from now ("Seven Psychopaths"), it provides a fantastic commentary on violent behavior. Not a criticism (especially with the events in Connecticut and Colorado being in many minds), but almost a reminder about the responsibility we all hold to others and ourselves... even if we can't meet 'us' from the future.
Posted by Andrew DiDonato at 5:32 PM