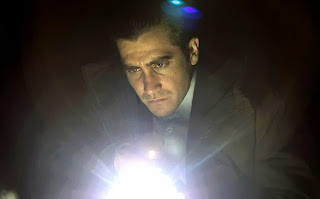 The script to Prisoners by Aaron Guzikowski is a fine script on its own. One can see why a movie studio would say yes to this project. This is also the kind of script that without a great director, it might just feel like another revenge tale. However, under the skilled attention of Denis Villeneuve (Incendies), an incredible cast, and high production values especially thanks to the work of legendary cinematography Roger Deakins (see most Coen brothers movies)- Prisoners was elevated to such a high level of storytelling that I can't help but find the film as deeply moving as I out it to be intricately dark and thrilling.

The film asks a basic question, how far would one go to save the ones we love? We've seen movies depict a government torturing a prisoner to gain information to save the lives of millions, but what about when it is your own family? The film introduces us to Keller Dover (Hugh Jackman) when he is out hunting with his son (Dylan Minnette who was astounding on NBC's Awake). They shoot a deer and on the drive back home, Dover somehow steers the conversation to talk about how to be prepared for anything no matter how fearful you might be. As a man, Dover is the kind of guy who has a basement full of survival gear and is deeply religious (the film is full of heavy-handed but effective symbolism (i.e. the snakes, being unable to finish the lord's prayer, etc.). His family seems accustomed to his personality as do his friends, Franklin and Nancy Birch (Terrence Howard and Viola Davis). On Thanksgiving, Dover, his wife (Maria Bello), his son, and daughter all go over to the Birch's house for dinner. The two young daughters of both families go outside to play and head back to the Dover residence only for them to go missing. Matters escalate and Detective Loki (Jake Gyllenhaal) believes the girls were abducted with his only suspect being Alex Jones (Paul Dano) a mentally challenged boy who is being cared for by his aunt (Melissa Leo). Now take a second and notice the talented names I've placed in parenthesis. The sheer acting prowess this film possesses, alongside a complex and twisty script, and beautifully dark and nuanced lighting elevates what sounds like a Law and Order episode and turns it into one of the most emotional experiences of the year.

This film is far from torture porn. Keller kidnaps Alex, tortures him and demands to know the location of the girls. There is seemingly just as much evidence and possibility that Alex knows something, as there is that he doesn't. If Keller is right about the boy, then he will get to see his daughter again who with every hour of each day is most likely crying to be with her family. If he is wrong, then he is committing a grave injustice and going against a set of morals that he feels strongly enough to break. Jackman and Gyllenhaal are like I've never seen them before. Jackman carries himself with such a rage and Gyllenhaal makes the case seem so personal in such a realistic manner that you forget the trope of the personally attached detective.  The film takes you inside the case with the pain faced by a grieving family and the constant struggles of the police to find a solution in a mountain of contradictions and crimes that pile on top of each other (just see the intense interrogation scene when a gun is taken off an officer by a suspect).

Villeneuve masterfully brings this all together and the final result is a film that I feel will leave audiences unsure of how the feel about the film's quality. I found it to be incredible, but maybe others will just be too turned off by a singular element that I see as part of a tapestry.
Posted by Andrew DiDonato at 8:13 AM