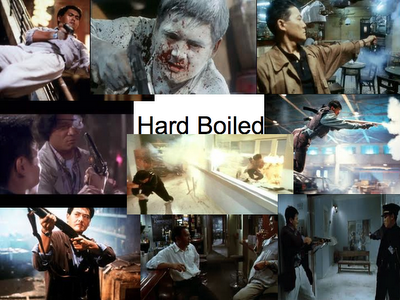 "Give a guy a gun, he thinks he's Superman. Give him two and he thinks he's God."
I find my thoughts being relatively short for this film. That being said, it is my favorite film from John Woo and arguably my favorite action film aside from some of the Bond films and Die Hard. The Departed always reminded me of Hard Boiled in that it follows two people involved in both the worlds of law and crime. In this case, one character is a cop while the other is an undercover cop, but both are starting to lose or at the very least question their morality. Hard Boiled is also quite possibly the most artful action film (isn't that what John Woo specializes in?). Everything is wonderfully staged and choreographed, almost like a dance of violence. Yes, the film is over-the-top and you have to take certain elements for granted. Relationships aren't the strongest here as they were in The Killer, but compared to The Killer, Woo's style feels stronger. I feel like he realizes the goal of what he wants the final product to look like. This film is the action genre to such an extreme that I can't help but finally realize Woo's influence on the West whether it be Quentin Tarantino (Reservoir Dogs, Kill Bill) or the Wachowski Brothers (The Matrix, Speed Racer). Don't get me wrong, there is still a more tangible story than one might think. I mean, the contrast between Tequila (Chow Yun Fat) and Tony (Tony Leung) is fantastic. I just get distracted with all the slow motion, freeze frames, and wipes. However, I would be lying if didn't say that after a while I started to enjoy the style. I didn't read too far into it and perhaps I'm just not familiar enough with either Woo or Hong Kong cinema. Don't get me wrong, some of the editing is unnecessary, but at times it really gives the film this outrageous flair that is undoubtably enjoyable. Throw in nuanced genre performances from Chow Yun Fat and Tony Leung and you can start to not care so much that this film idolizes gun porn over emotional development. You get a true sense of this world that is full of loss plus the occasional social message. Aside from some misplaced humor (never been a big fan of that, sorry) the film is quite possibly the most gratuitous fun I've ever had.
Posted by Andrew DiDonato at 6:09 PM