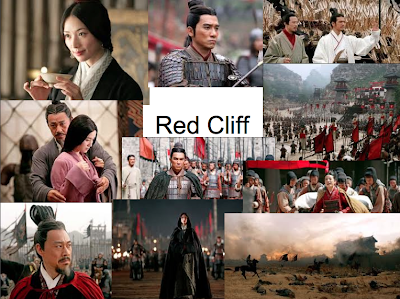 "Truth and illusion are often disguised as each other."
Note: Before I begin, I should point out that I saw the condensed two and a half hour United States version and not the 4 and a half hour Chinese version. As you'll see, I liked it very much and I will revisit the film through the longer version at a later date.
My thoughts on this one are pretty brief. Red Cliff has a lot going for it. It was the most expensive Chinese film ever made and had been in production hell for quite some time. The story can only be defined as epic, so it needs an epic vision to really capture the scale of the plot and the characters. This is John Woo's most recent film that has seen a release overseas and it's like The Lord of the Rings with samurai. The costumes are fantastic, the special effects are realistic, and the choreography along with more polished (at least compared to Woo's early films) cinematography and editing will have you not wanting to look away. This is John Woo's first Asian film in quite a while and his first historical epic. He had wanted to make this project for some time and after years of laboring, his hard work and vision has paid off in my opinion.
As technically proficient as the film is, I have to point out that it has such an excellent cast of fantastic personalities where each line feels like it has a meaning. This movie is not simply just good versus evil (even though we want one side to win more than the other), but we understand everyone's motivations and reasoning. I was previously introduced to Takeshi Kaneshiro in House of Flying Daggers and the character he plays here is very different. Still, it's a fantastic performance almost reminding me of Alec Guinness in Star Wars. The great Tony Leung is also good as usual as a character that reminded me of the roles of Toshiro Mifune. There is also a love story between Leung and a female and unlike most Woo films, I just felt like it really fits in this case.
This is new ground for Woo as both a writer and a director. He cites Akira Kurosawa as one of his influences and I think Kurosawa would've been very proud to see a film like this. The highest compliment I can pay this movie is that it's naturally poetic. Dare I say more? I'm going to go ahead and say it, having seen the following- A Better Tomorrow, The Killer, Bullet in the Head, Hard Boiled, Hard Target, Broken Arrow, Face/Off, Mission Impossible II, Windtalkers, and Paycheck... this is easily Woo's best film in my eyes perhaps because it was somewhat uncharacteristic in some respects for him and it provided him with a challenge. Simply masterful.
Posted by Andrew DiDonato at 2:50 PM