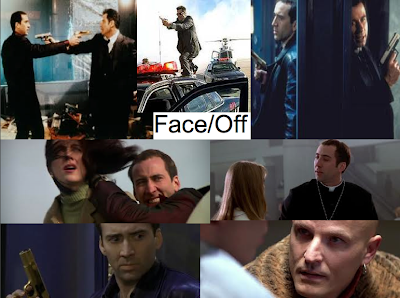 "Isn't this religious, ah yes. The eternal battle between good and evil, saints and sinners... but you are still not having fun."
At first, the premise of this movie sounded ridiculous to me. A police officer captures a terrorist, but to get information out of the terrorist's brother he surgically takes the terrorist's face and plants it on his own, but the terrorist escapes and takes the officer's face and plants it on his own... This just sounds like an Alfred Hitchcock plot on crack. The "case-of-mistaken-identity" thriller genre is taken into the science-fiction realm and the final result is about half stupid and half fun. Like most films from John Woo, plot isn't that carefully considered. At least in The Killer, Hard Boiled, and Bullet in the Head the plot wasn't over-plotted. By that I mean that Face/Off has so many plot points and character arcs that you could probably frame a season of a television series around this. The end result is a two hour plus movie that is so long that at one moment you can predict what will happen next while the next moment you are left in suspense. It really runs the gamut of storytelling ideas within the realm of this world.
The actors, John Travolta and Nicolas Cage, are at least having fun. Their unrestrained mannerisms might make you smirk, but you certainly can't look away. Cage has this pointy hawkish face while Travolta (and I try to mean this respectfully) looks like his face was carved out of a holiday ham. Both had enough roles before this movie came out that you could make a Saturday Night Live skit out of them (Travolta had Saturday Night Fever and Pulp Fiction while Cage had Raising Arizona and Leaving Las Vegas). Travolta and Cage are essentially doing impersonations of each other. This almost becomes an unintentional comedy about acting that I'd love to see done again with some of the greats (De Niro, Pacino, Nicholson, Walken, etc.). Like any John Woo film, you can still read into this and come away with a deeper message. It's about how our appearance shapes our personality and when we begin to break down- our physical being effects our emotional being and vice-versa. As a quick note, it was also nice to see actresses like Joan Allen and Gina Gershon in less serious roles (I know Allen from many films but her best performance being in The Contender while Gershon was primarily excellent in Bound). The cinematography and editing are typically awesome as they are in most Woo films and John Powell delivers a powerfully draining score (I mean that as a compliment).
I consider this a part of Cage's holy trinity of mid-nineties action movies (alongside Michael Bay's The Rock and Simon West's Con Air) so I'm used to seeing him act absurd (while Travolta seemed to master his absurdity in his wonderful recent performance in The Taking of Pelham 1 2 3), I'm just not used to seeing John Woo as a director go this "all-out." Then again, the script throws out a lot of big ideas so this needs to be a big movie and therefore you get used to everything being "dumbed-down" for the common denominator in the audience. John Woo, unfortunately, just feels like overkill is the solution as we have everything from slow motion to coats flapping in the wind (to even a nod to his own film The Killer by having the final shootout take place in a dove ridden church). Then again, would a movie like this work with subtlety? I don't think so. This is perhaps the craziest studio film of the nineties aside from Natural Born Killers and it is flat out insane. Overall, it's ultimately not a quality film, but I'd be damned if it wasn't a guilty pleasure of some sort.
Posted by Andrew DiDonato at 11:23 AM