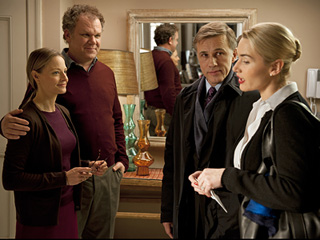 With a running time of about 80 minutes, Roman Polanski's Carnage is essentially a filmed version of the play by Yasmina Reza. Perhaps it is for that reason, that the film lacks a certain energy at times. The conversation flows well, but having seen the play performed on stage, this is something that can be difficult to justify cinematically. Tommy Lee Jones' The Sunset Limited had pulled it off and James Foley's Glengarry Glen Ross (even just looking at the scenes that are set in the office) is a near masterwork in how to translate a stageplay to the screen. Still, Polanski somehow falters with his presence almost feeling low-key, but his hand as the director isn't necessarily needed or pertinent as this film is a really a performance piece for four massively talented actors.

The acting and Reza's words (co-adapted by Polanski into a screenplay) really help the conversation flow. Each of the characters make their own points and the four of them are each at one time or another in their own corner against the other three. Sometimes it's two against two or one against one against one against one. The way in which the dialogue and content move forward is fascinating in a sort of modern day version of Who's Afraid of Virginia Woolf? in which civility quickly goes out the window. As opposed to two couples people coming back from a party, Carnage is about the parents of two kids who got into a playground fight. Michael and Penelope Longstreet (John C. Reilly and Jodie Foster) are the parents of the son who was hit with a stick and lost his teeth. They've invited in Allan and Nancy Cowan (Christoph Waltz and Kate Winslet), the parents of the boy who wielded the stick, over to their nicely accomadated Brooklyn apartment to discuss what happened between their kids. If the title is any indication, kindness quickly disappears in the place of resentment.

Each of the four players have distinct characteristics and the casting of four distinct actors propels this into an instantly watchable experience. In the same way that having Tommy Lee Jones and Samuel L. Jackson trade wits or Al Pacino exploding at Kevin Spacey as Jack Lemmon looks on, the casting is key to creating such memorable moments for a story that is set in a limited space. Polanski does allow us to leave the apartment building at two separate occasions at the beginning and end of the film, which I won't spoil, but progressive parents versus type A parents in a lavish room can only go so far even with four immensely talented performers working together.

Polanski is stuck with the choice of where to put his camera. He does a pretty good job, but he struggles with how much his choices are going to accomadate the performances. Sometimes there is a unique angle that is forcing everyone in the room into one shot with a longer lens. This continues throughout and there is almost a certain space created between us and the character. It's as if Polanski can't decide whether he wants the camera to be an active observer or not (see Taxi Driver or The Conversation for what I mean by a self-aware camera).

Still, the acting and the directing of the actors outweighs any issues I might have with Polanski's efforts behind the camera. The themes may at times be worn on the sleeve (adults becoming children, the need to assign blame, picking sides, lack of forgiveness, kids just being kids), but the four stars, working with Reza's words, find and understand their characters to make it appear seamless enough. Life is life and we complicate it because of our personal individuality to point where the drama created by a God of Carnage is constantly at work, even in such simple scenarios as eighty minutes in an apartment building.
Posted by Andrew DiDonato at 2:16 PM