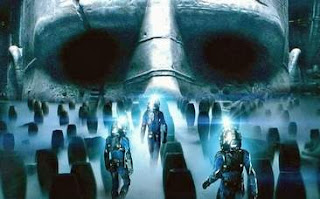 Prometheus, Ridley Scott's first science-fiction film in twenty years, is a big movie. No other word with the exception of synoyms like colossal, gigantic, etc. etc. can do the film justice. Like many of Scott's successful epics, this is not just big in scale, but it is also "big" in ideas. Whether it is Gladiator, Black Hawk Down, or Kingdom of Heaven, Scott is capable of bringing an aesthetic vision that is quintessentially his while still including and expanding on all of the fascinating themes and tropes that the screenwriters plant in the script. This is even noticeable in his more intimate and "quiet" films like Thelma and Louise or Matchstick Men. They all demonstrate a distinct presence of an auteur in every sense of the word as Scott knows how to use every tool in his directorial arsenal to tell a story. When he makes a film on the scale of Prometheus he seems to go big and constantly just give the audience more. More character moments, more beautiful imagery, and most importantly- a more interesting movie.

Of course, with a career as long and diverse as his, Scott does falter on occasion, but even then he always creates such a distinct visual world (his last film, Robin Hood, comes to mind). For example, Prometheus (both the movie and the spaceship of the same name where much of the film takes place) is at a glance just full of gritty titanium walls with moisture flowing everywhere. Then one just has to notice the way that Scott and cinematographer Dariusz Wolski, move the camera along these vast sets of metallic walls and rock pyramids. The film instantly becomes this dynamic exercise on just a purely visual level. On that superficial level, it's interesting of how I'm immediately reminded me of Danny Boyle's Sunshine (which I just re-watched recently) and that movie certainly takes a lot from Scott's own film Alien. I suppose it could be said that Prometheus is set in the same universe as both those films literally (in the case of Alien) and spiritually (in the case of both). This is a story about us as human beings attempting to satisfy our own existence whether it be for knowledge or safety. Although, where Alien was the lingering-shadows-on-the-wall survival thriller, Prometheus is on a much larger canvas.

The script, by Jon Spaihts and most importantly Damon Lindelof (ABC's Lost) takes advantage of using this large scale to tell a story that is the most atypical of the current slate of Hollywood films (The Avengers, Men in Black III, etc.). The story is incredibly ambigous and one question's answer leads to another three questions. Take the opening sequence for example. A grey being gives a piece of his body to the ground and water as a ship flies away. Immediately we are asking- where are we? Who is he? Why is he here? I personally thought this showed the creation of life. Well is it on Earth? Wherever it is, why was this being left here? What was his intent in doing this? The film then jumps to the year 2089 where two archeologists Elizabeth Shaw (Noomi Rapace) and Charlie Holloway (Logan Marshall-Green) have found a series of star maps in various ruins that they believe ancient beings placed on the planet Earth. Along with a crew of scientists and soldiers, they board the spaceship Prometheus to head to another ruin located on a desolate planet. The characters soon find themselves confronting everything from life to death, all of which harkens back to the grey being that began the cycle that these humans soon find themselves facing.

Most importantly, no matter how beautiful this film can be made to look, Scott is sure to use Lindelof and Spaihts' script as starting point to brilliantly cast this movie full of diverse actors for these distinct characters. Many of these people are opposites in more ways than one and whether they are clashing or agreeing with each other, the conversation is always interesting and furthers their own arcs. Shaw is very faith-oriented and the most heavy-handed conflict she comes into is with Holloway who is more of a believer in science. They are accompanied by Meredith Vickers (Charlize Theron) who is part of the Weyland-Yutani Corporation (Alien reference!) that wishes to use the findings by the archeologists for some sort of mysterious gain. She obviously comes into conflict with Captain Janek (Idris Elba) who is representative of the military and is able to glean the truth off of those who might wish to hide it. There are others as well, but perhaps the most perplexing character that we can learn the most from is David (Michael Fassbender). He is an android that learns human behavior from watching movies and can sometimes be the most intuitive of the group even though he still only does what he is told. Fassbender handles the character like a cross between Roy Batty from Blade Runner and Hal 9000 from 2001. He steals just about every scene he is in, while Rapace showcases a strength reminiscent of Sigourney Weaver's Ripley, and Marshall-Green gives a noticable and perhaps still somewhat understated performance as a man who is thrust into a complex situation of his own creation that is both physically dangerous and theologically based as well.

The film can feel incredibly long-winded when all is said and done, but it at least makes you think about its characters and story. Nothing feels mindless here as almost every moment and person has a purpose. The mythology can feel heavy and overbearing (just look at how I'm trying to make sense of the characters- am I overthinking them or just not thinking enough?), but Lindelof, Scott, and co. have created a movie where one doesn't need to understand much because the film leaves us as the audience to comprehend quite a bit about what the story is ultimately about. The truth behind the puzzles these characters are involved in becomes ours to solve at our own discretion and that is a highly rewarding experience no matter how long, flawed, or heavy-handed the film can ultimately be.
Posted by Andrew DiDonato at 7:55 PM