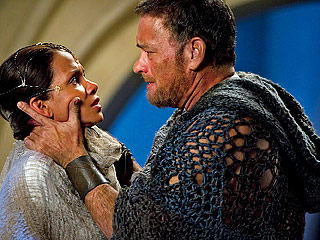 Cloud Atlas is an epic. Based on David Mitchell's novel, it moves from genre to genre to genre and with each one, every aspect of the filmmaking process is at its zeinith. The directing, acting, writing, music, art direction, cinematography, editing, sound, visual effects etc. etc. etc. There is such thought and care put into the film at every conceivable turn and it's not just one good movie, it's really six good movies that form one pleasant experience.

The film's stories are in fact connected as the cast portrays different characters in each of the segments. It should be noted that the segments are cut together as the film jumps back-and-forth between them. How the film's writer-directors Tom Tykwer & Andy Wachowski and Lana Wachowski chose when to move from one parallel moment to the next, I can't even begin to venture a guess. Like any visionaries, they saw the story in a manner that they could understand and tried to find a way to tell to an audience what they envisioned. The editing is almost hypnotic and reminiscent of scenes from previous Wachowski films like the planning scenes right before the third act of The Matrix Reloaded or the building to the climax in Speed Racer.

The cast is also incredibly competent. Each mini-film has its own world and its own set of rules and style. It seems that all the actors (Tom Hanks, Halle Berry, Jim Broadbent, Hugo Weaving, Jim Sturgess, Doona Bae, Ben Whishaw, James D'Arcy, Zhou Xun, Keith David, David Gyasi, Susan Sarandon, Hugh Grant) are fully committed to each role in a manner that is refreshing, fun, and what must've been professionally challenging.

So what did I think the film was about? Well I first think of each of the stories.
1- South Pacific Ocean, 1849- American lawyer Adam Ewing (Jim Sturgess) is on a boat to San Francisco where he must keep a slave (David Gyasi) hidden from a malevolent crew.
2- Edinburgh, Scotland, 1936- Robert Frobisher (Ben Whishaw) laments to his lover (James D'Arcy) about working as an apprentice to a decrepit composer (Jim Broadbent) whom he enters into a feud over who composed a piece of music. Robert discovers the diary of Adam.
3- San Fracisco, California, 1973- Investigative journalist Luisa Rey (Halle Berry) discovers a nuclear conspiracy with the help of Robert's former lover, now an old man.
4- United Kingdom, 2012- Timothy Cavendish (Jim Broadbent), a publisher (who was reading an adaptation of Luisa's adventure), becomes entangled with gangsters so he hides at a nursing home where he then attempts a comical escape from its oppressive grounds.
5- Neo Seoul 2144- Clone Sonmi-451 (Doona Bae) joins a resistence movement against an oppressive government. She feels empowered after watching a outlandish film version of Cavendish's exploits.
6- Hawaiian Islands, 2321 (post-apocalypse)- Tribesman Zachry (Tom Hanks), who worships the religious figure of Sonmi, embarks on a journey with a woman (Halle Berry) to possibly uncover the truths about what led to the world's state of being.

A costume drama. A love story. A conspiracy mystery. A comedy. A science-fiction adventure. A post-apocalyptic tale. Six genres and six stories with a through line that includes themes of love, kindness, and freedom. To me, the movie is about finding oneself, but realizing that those around us who we care for are just as important. Similar to The Matrix and Run Lola Run, Cloud Atlas functions as almost a wake-up call to let us know that both the individual matters within the scheme of society. Not only is Cloud Atlas freeing in how its narrative is artistically approached, but it is perhaps most freeing in what I perceived its message to be to its audience.
Posted by Andrew DiDonato at 11:46 AM