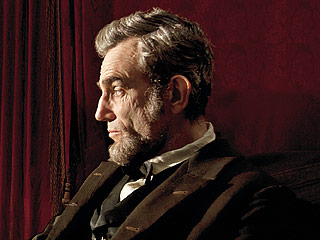 Daniel Day-Lewis' portrayal of the famous president is parts sullen, exhausted, fervant, and practical. Abraham Lincoln is shown as a deep thinker, a passionate debater, and someone who truly does have a sense of what his role in the world ought to be. I want to use the worst "ghostly" to describe him. He moves from a meeting where he tells stories to his own bedroom where he argues with his wife Mary (Sally Field) and even feels omnipresent even when not in a scene.

Much of the film is set during January 1865 and follows Lincoln's successful attempt to pass the 13th amendment that would abolish slavery. He is also trying to end the Civil War with the southern states thus leaving him at a crossroads. It is almost impossible to have both at the same time and with men dying each week, the public wants the bloodshed to end. Then again, the amendment must be passed before the end of the war if it is to be effectual.

Director Steven Spielberg is at his often best and has done the job of shepherding all aspects of the filmmaking process to their full force. Cinematographer Janusz Kaminski's work is suitably muted and John Williams' score once again includes pieces of music that are parts iconic and ultimately moving. The cast is one of extreme gravitas. Kushner's screenplay must be an actor's dream in how oratory and yet never boring it is; it's full of scenes and dialogue that are lyrical in nature.

Of course Day-Lewis stands out, but Sally Field's Mary also provides a stern backbone for her husband even as an independent character all of her own who might blame her husband for never being there during the loss of her son. David Strathairn is fantastic as Secretary of State of William Seward who is at the president's side and Joseph Gordon-Levitt also provides great contrast against Day-Lewis in his role as Robert Todd Lincoln, who is stuck living in an impossible man's shadow not wanting the same life. Finally there is Tommy Lee Jones as abolitionist Thaddeus Stevens, a man who will do whatever it takes and whose angry, impassionate, and insulting speeches are delivered with a great intensity. Then there are James Spader, Hal Holbrook, John Hawkes, Jackie Earle Haley, Bruce McGill, Tim Blake Nelson, Jared Harris, Lee Pace, Gloria Reuben, Michael Stuhlbarg, Walton Goggins, David Oyelowo, Lukas Haas, Dane DeHaan, Julie White, Gregory Itzin, Adam Driver, S. Epatha Merkerson, et. al.

In case my overabudance of praise hasn't been noted, in any ranking I've come up with for the movies I've seen in 2012, Lincoln sits at the top as my favorite. It's almost fascinatingly aware of the importance of the events it is depicting (as I'm sure the actual Lincoln was) and yet at no point is there a sense of false pretense, that the film is trying to be preachy even though it functions as a fantastic history lesson on passing an amendment/bill. It's a historical dramatization, but it's far from dry. The film is truly a character piece about a man who looked so outward to others, but struggled and then suceeded in looking inward to himself- something a common man, which Abe started out as, can aspire to.
Posted by Andrew DiDonato at 7:51 AM