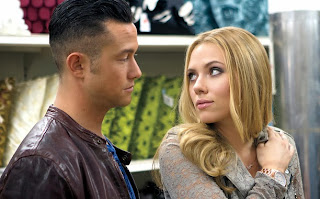 The most impressive thing about Don Jon, the directorial debut of actor Joseph Gordon-Levitt (who stars as Jon in the film), is how the story's progression feels incredibly intuitive and natural. Assuming the first draft of the script and the final cut of the film out of the editing room resembles Gordon-Levitt's vision, one can see the film doesn't really make any pretensions. It's meant to be very funny, boisterously high-spirited, and therefore just all-around quite entertaining. Dare I say that this debut (that I'm not quite sure how universally adored, hated, or accepted it is) kind of has a certain Robert Altman-esque flavor to it? Not so much in style or content, but in how the film feels as pastiche (meant as a compliment) as it feels wholly original? This is an R-rated comedy that I'm sure could've been pitched to an investor as Steve McQueen's 2011 film Shame meets Saturday Night Fever and because it never lets up and relishes its own little microcosmic world of its lead character, it never seems to lose steam.

Except perhaps at one point as the film winds down towards its conclusion. Jon is a guy who has trouble with relationships because although he can have any girl he wants, his porn addiction prevents him from being able to appreciate or build intimacy with his most recent beau, Barbara (Scarlett Johansson). Throughout the film, Jon is taking a class to impress his girlfriend and keeps running into a woman named Esther (Julianne Moore). Without ruining too much of the film, Jon eventually accompanies Esther back to her place when his relationship with Barbara is not really working out. The film then takes a dramatic turn that although is handled in a manner that doesn't make it feel overly sudden, I felt like it sort of halts the film's preppy pace. At least the ending is redeeming and meaningful despite feeling forced by that random bit of drama I just referenced.

At the end of the day, Don Jon is a movie about movies and whether they are adult or not, there is a small bit of subtext about how those smatterings of pop-culture have an impact on our personal lives. As the year winds down, it's nice to see a hardened (no pun intended) and freshly put together piece of entertainment.
Posted by Andrew DiDonato at 8:19 PM