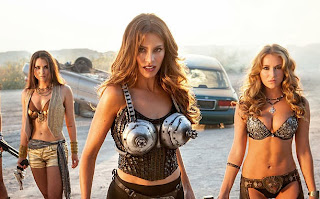 Machete Kills is certainly crazier than the first installment. It's parts Southern noir meets Moonraker (there's a sentence I thought I'd never type). Unfortunately for me (and based on conversations with friends, I seem to be showcasing the less popular opinion), crazier doesn't equate to funner in my opinion. I thought Robert Rodriguez's 2010 Machete film was hilarious. It was clever and with this sequel I was hoping that I'd get more of the same. Sure, Rodriguez is intelligent and creative enough to know that more of the same shouldn't really be the answer. Give the audience more, more, and more of something different with enough of the DNA of the first to compliment what has come before. Yet I can't say why, but there are a few cases of where I'm comfortable with a similar experience when it comes to some film franchises. Take Peter Jackson's prequel Hobbit trilogy to his Lord of the Rings trilogy. You could complain about it being just that phrase of "more of the same", but when "the same" is so damn good, maybe you shouldn't mess with it.

Where Machete was over the top with a certain restrained sensibility (because lets face it, exploitation movies did look like and were actually made for dirt cheap), Machete Kills throws that out the window.  If the first was Rodriguez making the exploitive version of a Mel Brooks parody, then this is if Mel Brooks became possessed by a money-grubbing studio head (and I don't mean for that to sound as insulting of a criticism as it might seem). Machete Kills still delivers something of a good time because its satire is now includes that of sequels and blockbuster-filmmaking. Gone is the R-rated and endearingly constructed parodical storyline of the first. Here the film moves from scene-to-scene, over complicates the plot, and amps the spirit of the first film to an 11 on the 1-10 scale. Maybe Rodriguez is a mad genius in a sense. Where the first film was trashy with a wink, this film is trashy with a nod and I had a little trouble getting behind it all.
Posted by Andrew DiDonato at 6:12 PM