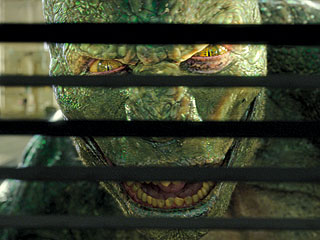 Five years since the last film in the series, here comes another Spider-Man film, but this time- it's a reboot/remake/whatever you want to call it. I'm not really against the idea. I look at films such as this as the equivalent of a revival of a play. New talent is going to put a spin on a story or concept we are familiar with and sometimes something artful can come of it. I also read a lot of comic books, both mainstream and independent. When it comes to characters owned by a company, I'm used to different writers and artists interpreting the character(s) differently and taking them in an unique direction.

I should probably start by saying that I'm not the biggest fan of the some of the superhero films from the early-mid 2000s that everyone loves. When I was younger I enjoyed Singer's X-Men and Raimi's Spider-Man for the pure value of "look, they made a movie based on characters I love that isn't crap." Those films didn't really hold up in re-watch value for me. When it came to Sam Raimi's Spider-Man, sometimes I just felt that the action wasn't well mixed with the human relationships that were such an integral part of the characters' lives (a problem for many an action blockbuster). I still can't stress that Raimi, Singer, and others did the best job they could. They laid the groundwork for others like Matthew Vaughn, but I suppose I just preferred the heroes that were featured in Avengers such as Downey Jr.'s mature and cocky Iron Man or Hemsworth's fish-out-of-water Thor.

Something I did enjoy was how Spider-Man actor Tobey Maguire handled the adult Peter Parker. The character was believable for the high school scenes of the first Spider-Man, but Maguire (and Kirsten Dunst) wasn't. Sidenote: This is probably because it's a movie rule that most highschoolers in films must be played by 20-somethings. Once Maguire played Peter Parker living in an apartment, trying to juggle jobs, and get married- that was the Spider-Man I knew. I grew up reading Ultimate Spider-Man by Brian Michael Bendis so aside from that and reprints of the older Marvel work by Lee/Ditko/et. al. that was the only taste I had of young Peter Parker. I actually enjoyed the tone of J. Michael Straczynski's Spider-Man and that was the Spider-Man that interacted with the shared Marvel Universe and therefore the one I came to know, enjoy, and expect. There is an argument of whether Spider-Man works better as young/old or married/unmarried. Honestly, it all depends on the creative team tackling the world.

Soooooo (apologies from the long rant)... I'm very surprised at the positive reaction that Marc Webb's Amazing Spider-Man has received, but as I just took way too many words to explain, I'm probably biased. With Spider-Man, Stan Lee created the everyman superhero. He came up with the right amount of obvious but ingenious qualities that would make a character more relatable and create an icon in a manner that, in my opinion, was unprecedented as far as comics or superheroes or pop-culture was concerned as of the early 1960's. This Peter Parker (Andrew Garfield) is like the MTV-itized version of that. Peter is not bullied. Peter loves skateboarding. He's hip and he's cool and I don't really recognize him. Aside from the fact that once again Garfield looks like he's 20-something in high school (again with that...), Peter doesn't feel romantically awkward or enough of an outcast for the iconic tropes of Spider-Man to take shape.

There are hints of those qualities, but just that, hints. When Peter is Spider-Man though, I do appreciate that. He's younger, leaner, more agile, and just a lot more fun that Maguire's more reserved and mature representation of the heroic persona. Yet when Spider-Man encounters the CGI-created Lizard (Rhys Ifans), I start to take issue with how frantic the action becomes. It feels like a video game. It's comprehensible to understand, but Spidey was more interesting when he was fighting or saving actual people. When Ifans' face is actually seen as Curt Connors, I would rather watch him than a cardboard-cutout equivalent of a villain.

As for the origin story of this film, not too much is changed. I don't mind that because the one thing this Spidey film does have is likeable actors going through the motions. Andrew Garfield and Emma Stone have such great chemistry and the supporting cast of Rhys Ifans, Denis Leary, Sally Field, and Martin Sheen are all very enjoyable to watch despite the less-than-fantastic quality of the script. I guess my response to this film has a lot to do with the surprising response by others to the film. The performances really help to elevate everything, but I feel like Webb only gets half of Spidey's world correct.
Posted by Andrew DiDonato at 11:42 AM No comments: 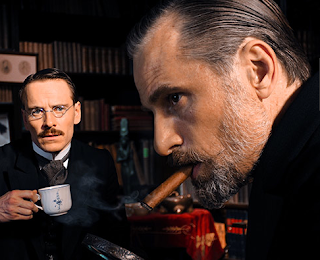 The work of one of my many favorite filmmakers, writer-director David Cronenberg, is no stranger to kink (or as I like how Merriam-Webster puts it- non-normative sexual behavior). Many of his films, even "body-horror" like The Fly (1986), have been written to have obscure sexual undertones to them. Dead Ringers (1988) and Crash (1996) are the most notable ones, but with his latest film A Dangerous Method, Cronenberg actually addresses the source from where much thought and theory on sexuality as well as behaviors came from- the real-life studies by Carl Jung (Michael Fassbender) and Sigmund Freud (Viggo Mortensen).

I suppose at a glance, one might be surprised by this choice of subject for Cronenberg given how he has only made one previous film that could possibly be considered a costume drama (M. Butterfly). Yet if you look at his filmography, he was always been elusive and versatile and where two of his films might appear similar, they would only share his style before they diverged into completely different territories. I do feel this is more dialogue-heavy than most of his past work. Christopher Hampton (Dangerous Liasons, Atonement) handled the screenplay which is based on his play "The Talking Cure" which in turn is based on the book "A Most Dangerous Method" by John Kerr. The film is certainly a much more intellectually stimulating experience than expected and serves as an interesting companion (for either comparison or contrast) to another recent sexually-driven drama starring Michael Fassbender, Steve McQueen's Shame (2011).

Cronenberg assembles a great crew around him to put much care into the aesthetics that even I sometimes take for granted- cinematographer Peter Suschitzky, editor Ronald Sanders, composer Howard Shore, and most impressive is the art direction by James McAteer and Gernot Thondel as well as costumes by Cronenberg's sister Denise. The film looks absolutely stunning, but there is a certain dryness to it at times that is unbalanced by emotive moments. These prim-and-proper looking environments suddenly becoming the battleground for progressive sexual thought. Perhaps that is because the material is so dense that I am having a hard time admitting whether I like this film or not.

It handles a mature territory with an in depth point of view with highly analytical characters who themselves are analyzed. The problem is that the more I think about it, perhaps the film is just too complex for my liking. Not in a way that I misunderstand it, but perhaps after a certain point I want to see something unique happen and instead I'm just left with the intricacies of performance and image and not the bigger picture.

At least A Dangerous Method is both ferocious and passionate in how it handles sexuality both as a script in and its performances. The film explores compulsion with characters who are part of a certain bourgeois lifestyle so they hide their feelings from each other. Keira Knightley's Sabina Spielren goes against this. She makes her feelings very apparent whether it is through her hysterics or her calmer conversations with Sigmund or Carl. Knightley delivers a disturbing portrayal that is convincingly shocking. It contrasts nicely with Mortensen's Freud (this is Mortensen's third film with Cronenberg) as he balances how reserved and intense he can be; he is shown to be unpredictable and contained. Fassbender's Jung is somewhere in the middle, pulled in many directions in a performance that is up there with the recent caliber of Fassbender's work (Fish Tank, Jane Eyre, X-Men, Shame, Prometheus... the list seems to continue on and on).

The theories and lives of these people interact into a unique three-way relationship, but at a certain point I want more out of these characters and they seem to falter in my interest and care by the end of the well-intended final frame.
Posted by Andrew DiDonato at 1:02 PM 1 comment: