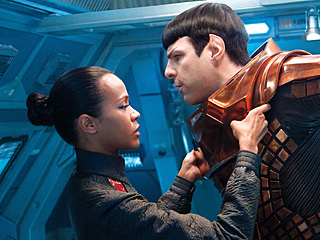 The other day I was taking a glance at the nominations from years past for the Saturn Awards. The 90s were full of nominations for sci-fi/fantasy camp like Lost in Space and Event Horizon and the horror categories always had whatever the most recent Freddy/Michael/Jason movie that was out. Compare that to recent nominees- Nolan's Inception, Allen's Midnight in Paris, Scorsese's Hugo, Lee's Life of Pi, and most noticeably the likes of The Cabin in the Woods, The Avengers, or The Dark Knight Rises. These "pop-culture" movies (especially those that are adaptations/remakes/reboots) are being treated seriously. Whether it's with all-star casts or talented writers and directors, the likes of Bryan Singer, Sam Raimi, Christopher Nolan et. al. have ushered in an era where a new respect (critically and comercially) can be found for these high-concept sci-fi/fantasy blockbuster pictures.

With his fourth feature, director J.J. Abrams and his team's work on Star Trek is no exception. The script has an emotional wallop to it; questions about modern morality and ethical boundaries (more deftly mastered by Nolan with the Batman films) are faced by many of these diverse characters. Unfortunately, a problem I find with the film and one that I even picked up traces of in the likes of The Avengers, Iron Man 3, and Man of Steel is the ultimate and timely descent of the material into what has been described with negative connation as "blockbuster fare." Make way for the fight or visual effects spectacle as suddenly a character has just the right amount of power or strength to continue through the story (Khan), plot devices that have been discussed suddenly begin to work in our characters' favor (warp drives), and the ending is convenient and provides closure. It's about how well the filmmakers are able to balance the crowd-pleasing with some gravitas.

In this case, Abrams does a pretty good job (thinking back, I'm a bit more partial to his first Trek effort in how it acknowledged its franchise's popular culture with modernity), but at a certain point the movie just feels fun and carefree. It's an enjoyable experience and the cast led by Chris Pine, Zachary Quinto, and Benedict Cumberbatch are incredible in their given roles with the material. The first great blockbuster of the year and it certainly achieves its goal of heightening and preparing Gene Roddenberry's world for the 21st century.
Posted by Andrew DiDonato at 4:28 PM No comments: 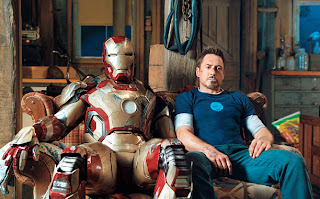 Iron Man 3 belongs to a group of films that I'd say are just as easy to hate as they are to love. There is an awful lot of action and excitement. Marvel productions (and several blockbusters nowadays) always attract an unique blend of talent both in front of and behind the camera. This film was directed by Shane Black (Kiss Kiss Bang Bang) who adds his touch of wit and action sensibilities to the world previously handled primarily by Jon Favreau. Take the sequence where Tony Stark (Robert Downey Jr.) escapes from a basement prison in Florida belonging to the Mandarin (Ben Kingsley) and he is zipping and flying across the small area as he zaps and punches guards that try to storm him. Absolutely thrilling and executed in a way reminiscent of other Black-related productions such as say, Lethal Weapon.

Yet, for the popcorn-blockbuster'ey fun of it all, there never feels like there is much at stake (for me at least). A chief complaint is the "complimentary annoying kid" character who doesn't seem to serve much purpose. Was there no other way to advance the plot or character other than having this boy show up to help Tony who is alone and can't call for help... but it turns out he can, just not The Avengers. He can call Pepper (Gwyneth Paltrow) or Rhodey (Don Cheadle) and is so alone that he is able to drive a car to Florida without paying for tolls or gas and he can build just about anything he wants. If you can't pick up the sarcasm in my writing, I'm just curious as to how there seems to be this concentration on how independent and helpless Tony is... when he really isn't. His intelligence can be difficult to use as a crutch, but thankfully Robert Downey Jr. is back as the character so for any minor (and I do mean minor) shortcomings the plot might have, Downey is a lot of fun to watch.

If working with writer/directors who specialize in tongue-in-cheek dialogue like Jon Favreau and Joss Whedon didn't already signify how talented at this character he was, consider Iron Man 3 just one more reminder of how integral Downey Jr.'s portrayal is to making this character work. I do make this statement as more of a fan of the comics then of the films. Having watched so many great characters have poor screen adaptations, I'm happy that Marvel Studios and co. have found a great realistic center to all to these effects-driven pieces and that center is undoubtably Downey Jr.'s acting sensibilities (for four films now I might add and it isn't getting the least bit tiring for me).

So once again, similar to my qualms about John Carter, the film is fun and boisterious enough to forgive any of its mediocrity and delivers in being a passable addition to pop-culture-infused filmmaking.
Posted by Andrew DiDonato at 2:49 PM No comments: