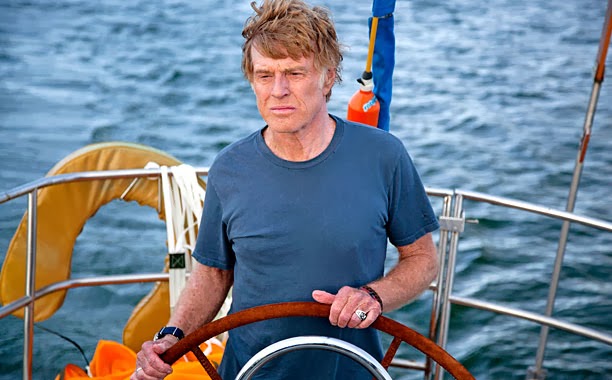 You can count on a hand the lines of or number of sequences that feature dialogue. The film opens with a voice-over stating "I'm sorry. I know that means little at this point, but I am. I tried. I think you would all agree that I tried. To be true, to be strong, to be kind, to love, to be right. But I wasn't. All is lost." Later the main character, who is credited at the end as Our Man (Robert Redford), says into his radio receiever "This is the Virginia Jean with an S.O.S. call, over" a few times as he struggles to repair his boat that crashed into a shipping container carrying shoes that must've fell off a larger boat. Then he lets out a powerful scream of "FUCK" when he is on a liferaft after having left his treasured boat behind. Then he screams "help!" as a container ship that is practically on auto-pilot just wanders quite literally right past him on the raft. He screams "help" some more at the end, but that's about it.

All Is Lost isn't exactly just a minimalist film for the sake of minimalism. It certainly features the spectacle one sees in Gravity and has a plot that could easily be similar to that of such thrillers as Saw, Buried, Frozen, Paranormal Activity, ATM, and numerous other low-budget horror films. It's almost more along the lines of a play where the action can take place in a single setting (The Sunset Limited, Glengarry Glen Ross), but in this case that setting is the abyss of an ocean. All Is Lost has minimalist elements, but it certainly feels more existential than anything else. It is ultimately about a man being sucked into a void that he has fallen into by himself. What do we know of him? He has a family which means he has a connection to something and therefore a reason to survive. He writes a note to them during an incredibly haunting scene that if the viewer takes a moment to think, they'll realize that the note chronoligcally matches up with the voice over based on a title-card's stated time that is presented as a subtitle toward the beginning of the film. The movie it turns out for his natch visual effects and craftsmanship to really be about survival when one's strongest enemy is his own loneliness. It's a character piece no matter which way one tries to decipher it.

This is the second film from J.C. Chandor (Margin Call). With this as his second feature he has already shown that he is a visionary talent of great depth and understanding of story and character and has exemplified such under qutie versatile circumstances. The film is beautifully shot by Frank G. DeMarco, has a great sound design and mix, and is well edited. The score by Alexander Ebert tells a story of its own just with the music in and of itself. Coupled with the images and during a film where the music moves between booming and atmospheric without any notice, it becomes a great tool to help further express what Robert Redford is already nailing with just a look.

Redford's expressiveness is interesting. It isn't like say Javier Bardem's in Biutiful where you can feel the pain just off his face alone. Redford is ragged, more intensive, and carries himself in just a specific manner that even his stoicism shines through in such a surprising and revelatory nature. It feels like the Sundance Kid has reinvented his no-nonsense persona into something much more modern and equal parts hopefull and downtrodden. We understand our man's methodology as he moves from patching a hole to navigating for his survival. This obviously all must've come from a well-thought out script by Chandor and this film's story alone sets it apart from many films I've seen. The best thing about All Is Lost is that it functions on so many levels and one of those asks for such a strong personal connection that it only feels natural for the material to make with its audience.
Posted by Andrew DiDonato at 3:03 PM