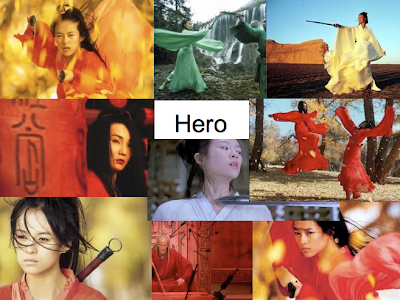 "How swift thy sword."
The general consensus of Hero seems to be that it looks beautiful but the story doesn't measure up. The same has been said of Zhang Yimou's House of Flying Daggers and some comments have gone as far to say that Zhang Yimou has sold out when comparing Hero and House of Flying Daggers to his previous works like Raise the Red Lantern and To Live. Whatever the case, the man is an extremely, critically acclaimed filmmaker and I was very excited to see his take on the martial arts genre as my first foray into his filmography. I found some problems, but I hope that when I see the rest of his work, the beauty that exists faintly behind this story comes to the forefront of others.
Hero takes place in ancient China when a man known as Nameless comes to the King of Qin's castle and seeks an audience with the King. After walking past countless soldiers, Nameless is permitted one hundred paces from the throne to tell a series of stories (if he steps closer without permission, he will be killed). The stories tell of how Nameless vanquished three famous assassins that have been trying to kill the King for years. With each story, Nameless is allowed closer to the King but the King has his own version of what happened as he refuses to believe that a man he has never heard of killed the great assassins known as Broken Sword, Flying Snow, and Long Sky. Nevertheless, while the King appears to think he has the upper hand, it is Nameless's ulterior motives that may be the King's downfall.
I enjoyed watching the martial arts sequences. I loved seeing all the interaction with water especially during the fight on the lake between Broken Sword and Nameless where the camera goes under the water. Water is also present during the fight between Nameless and Long Sky as it drips down through the ceiling of a house where chess is played both literally and figuratively. Zhang Yimou is known for his use of colors and with the help of Christopher Doyle (Wong Kar-Wai's cinematographer), the camerawork accentuates all the hues that are present. The scenes either look gray, red, blue, white, green, or black for each of the stories that Nameless or the King tells (I'm reminded of Steven Soderbergh's Traffic or of the Wachowski Brothers' The Matrix, where each segment had been color corrected). Everything is beautifully colored from the leaves to the silk costumes. I loved the staging of the scenes such as how arrows attack a school while calligraphers write and how a blind harp player plays while a battle rages on. This film exemplifies martial arts as poetry where you could defeat an opponent without even fighting them.
Like I said, the cinematography is top notch, but so is the editing. Scenes are paced very well when looked at by themselves, but I had some issues with the pace of the overall story. The story started so strong but then it felt bogged down by unnecessary character development and relationships. Especially the relationships between Broken Sword, Flying Snow, and Moon felt too shallow and over-dramatic and the acting (especially on the part of Jet Li) just didn't move me. Then again, these are stale faced warriors we are dealing with but still, I wasn't really moved by any of their tragic fates. Was the character of Moon even needed? I felt it was just a reason to get Zhang Ziyi in a cast that already included heavyweights such as Jet Li, Tony Leung, Maggie Cheung, and Donnie Yen. I also don't know if I like how the film tries to use the Rashomon effect. Not that Akira Kurosawa wouldn't be proud, but the film doesn't really need multiple stylized accounts to get the the point and themes behind the story.
The themes themselves are, however, actually important. Should it be fighting a war to reach peace or using peace to end a war? I felt that style over substance began to trickle out toward the end where nothing too deep and meaningful was achieved. I also had trouble relating to some of the nationalistic sentiment (shown in the opening and closing texts of the movie) but the tones that surrounded such moments were ones of mourning and not patriotism. So yes I felt the tragedy, it just unfortunately didn't affect me.
Posted by Andrew DiDonato at 2:00 PM