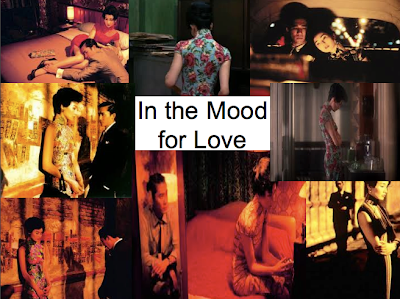 "You notice things if you pay attention."
Wong Kar-wai's In the Mood for Love moves like a dream. Not that it is jumbled, it may occasionally jump a little here or there, but it seems like something where it is just a vast amount of content but with no emotional anchor. If there is an anchor, it's a small one because the film sort of just passes over me. The story follows Mr. Chow (Tony Leung) and Mrs. Chan (Maggie Cheung), two neighbors whose spouses are having an affair with each other. When Mr. Chow and Mrs. Chan find out, they decide to begin spending time with each other but will only remain as friends and not commit the sins of their significant others. Shot by Christopher Doyle, the film supposedly didn't have much of a script, so I wonder if that is why the close-up shots feel wasted on the faces of Leung and Cheung. I could presume the actors had to reach into their bag of emotional tricks on the day of shooting and not to say they were ill-prepared but without a script, I'm impressed with how well they conveyed their characters' emotional experience. Still, like I said, the shot feels wasted. Tony Leung and Maggie Cheung just look like they are going through the paces. That kind of makes sense since they begin roleplaying how their spouses act with each other (up until before the sex I assume). Still, I don't feel any emotional connection with them at all. Every so often there is a unique camera angle or a beautifully framed shot of something insignificant like a cigarette. How am I supposed to relate to these characters if the camera is more obsessed with what is around them? The story is a great one but I don't want to empathize alongside these characters, I want to feel with them. There is no great emotional boundary that is pushed and that is what I like to see in movies about adultery. Perhaps I've been spoiled since I just watched two Park Chan-wook films where his characters got pushed beyond simple human emotions but then again, this movie isn't so much about the adultery. The adultery and even the spouses is/are off-screen. Yet in films like Unfaithful or Little Children or Fatal Attraction, I often feel the pain of these characters when I see their others cheating on them. Without that context, I feel like I'm in another culture (no pun intended since this is a foreign film). I don't get the roleplaying scenes and I don't even feel that much of a connection with Mr. Chow and Mrs. Chan when they begin to inevitably fall for each other. Other complaints include those black screens with text on them at the beginning and end of the film. They seem to give us the meaning and theme of what we were about to and later have witnessed. I like it when those are hidden in the film and I almost have to reach a deeper understanding to search for them. Another thing is that the score is beautiful but does it have to be so repetitive? Couldn't other music be used to reach the same point or feeling? I can appreciate a lot about the film but I can't connect to it. I feel so bad because I see the rave reviews but I don't understand them. I should point out that I'm obviously complaining quite a bit but I do tend to do that when I pick up even the smallest of flaws. This is a good film and I did like a lot, it just wasn't a great film. Maybe I'm not cut out for the avant garde or maybe I'm culturally spoiled by American film. Something was lacking here, and I'm not sure what it was.
Posted by Andrew DiDonato at 6:50 PM