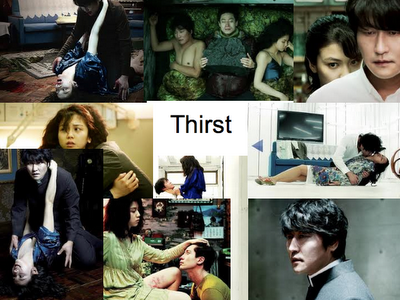 "He loved helping the hungry. He'd offer me his blood if he wasn't in a coma. If only you heard the sponge cake story."
Park Chan-wook's latest film certainly wins the Guinness Book of World Records award for most slurping in a movie. On a serious note, having only seen Park Chan-wook's Oldboy, if I were to base his movies off of just that film, I would assume his movies excel at going to the depths of human nature in which someone is pushed to their emotional extremes in what starts out as a genre film but quickly becomes a tragedy. Well, Thirst follows that outline very closely. The plot of the film is that a priest named Sang-hyun becomes a vampire due to a failed medical trail that ended in a blood transfusion. Sang-hyun becomes very popular as he was the only survivor of the experiment. His newfound celebrity status has him summoned by a woman whose son is sick. The priest realizes he used to know this family from when he was younger and eventually he reconnects with them as he is invited to their game night with their family friends. Sang-hyun is soon reminded of a latent attraction to the son's wife, whose name is Tae-ju.
Song Kang-ho stars as the priest and the character is perhaps more fleshed out than the vengeance-driven protagonist from Oldboy. Sang-hyun is a deeply good man who later gives into his desires but he soon finds himself tortured. There were several scenes where Tae-ju would be up to mischief but because he loves her, Sang-hyun would just stand back and watch her. In these scenes, it just takes one look at Song Kang-ho to get this sense of a truly tortured individual. I was reminded that vampires have to act evil not out of desire but out of need and the film uses that as a central theme. This theme works well by having such a religious protagonist because Sang-hyun is a man who believes in god but is powerless to help the sick. This goes back to why he entered the medical trials in the first place and how he must fight against his desires to achieve his needs. The film becomes cyclical in that sense and I consider that the making of great tragedy.
I really had no problems with the film. At times I was horrified and at other times it was enjoying to see a vampire film feel so epic and emotional. Perhaps some less romance would be better, but overall I felt that Park Chan-wook used the romance between Sang-hyun and Tae-ju to prepare us for the devastating climaxes and finale. My favorite scene had to be when Sang-hyun tries to convert Tae-ju on the floor of her apartment. Everything from the camerawork to the score was exquisite. On a final note, this may not be the best modern vampire film (I leave that honor to either Let the Right One In or Shadow of the Vampire) but it is extremely unique. So unique that I don't plan on revisiting this film so I can let the emotional impact just sit with me. That and the slurping will be remembered very well.
Posted by Andrew DiDonato at 11:03 AM