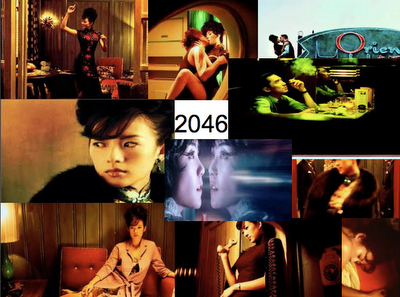 "I have a secret to tell you. Will you leave with me?"
I should probably clarify what my "cinematic relationship" with Wong Kar-wai films are before I go any further (and let me say, I generally gush over this guy's work) . Yes, I didn't think his most acclaimed film, In the Mood for Love, was "all that." I just didn't click with me. So why would I continue to view his films? Well I'm a huge fan of Fallen Angels and that alone places Wong Kar-wai somewhere on my favorite 100 directors list. Every so often I hear about his films and they just sound intriguing. 2046 was the one I really wanted to see. Since I had seen In the Mood for Love twice, I wondered how I would respond to a sequel. Well this is both a sequel in continuing the story of Chow and both exploring the spirit of love that began to manifest in In the Mood for Love. Watching 2046 was an eye-opening experience that ventured more into the art-hosue (something I've rarely experienced) but it still featured an amazing performance from Tony Leung, some of the best cinematography I've ever seen (by Christopher Doyle), and it was probably the best movie dealing with the theme of love that was released in the 2000's aside from Eternal Sunshine of the Spotless Mind (2046 could even hold its own with some of Woody Allen's explorations of love and lust).
Unlike In the Mood for Love, I feel as if 2046 really gets us inside the head of Tony Leung's character. I feel with him, not for him. We are not placed at a distance to look at both sides of a forbidden couple but instead we get right up close to a grief-stricken man. He is the narrator of this tale after all and even when he speaks, Tony Leung's diction just has such a power to it (and keep in mind, he ain't speaking English). Now this film doesn't just deal with love, but it also deals with remembrance. The affair with Maggie Cheung's character (who returns briefly here) has left a scar in Chow's heart. He has now given into his lustful desires and it led me to an interesting comparison between In the Mood for Love and 2046. For all the sexual tension that exists in the first film, the act of sex is featured in this film.
In the Mood for Love is a typical title that could easily be analyzed but why is this called 2046? Well, with Wong Kar-wai being the master of the themes he showcases (and how he works them into his narrative), he has Chow writing about a place that I'm frankly not sure what the deal is, but it's called 2046. It's a science-fiction world where men and women go to find their memories but I also feel they can find love and grief there just as well. It is not as much of a place but a metaphor or analogy for a state of mind. What is so great about the land of 2046 is that sometimes a science-fiction angle could serve as a distraction, but here it is an addition.
Speaking of additions, Wong Kar-wai has quite a collection of femme fatales in the film. Gong Li, Faye Wong, and the amazing Zhang Ziyi. Zhang Ziyi surprised me the most as she showed more range than she showed in Crouching Tiger Hidden Dragon, Hero, and House of Flying Daggers. One moment she could be flirty and the next she could be emotionally devastated. Perfect for someone who is appearing alongside the amazing Tony Leung. He is phenomenal as he has been from Hard Boiled to In the Mood for Love. I truly believed a man was falling for women as he evolved and eventually completed an amazing character arc as a man who learns from his mistakes which stem from his past.
The cast is not the only selling point here, pretty much everything that you see and hear is also a huge part of it. The costumes, the set design, the cinematography, the editing, and the amazing (but repetitive) score... everything is coming together in a way that only a maestro like Wong Kar-wai can control. This is poetic meaning fully realized and that is the highest compliment I can pay a filmmaker, especially one from a culture that I'm so unfamiliar with. Where I felt like In the Mood for Love was an artistic take on a "cheating spouses" movie, 2046 is like something that someone of Ingmar Bergman's status would be making if he was around today. Funny thing is is how simple of a story this is. A man keeps trying to fall in love. There, I just summed up a two hour movie, but Wong Kar-wai does what any good filmmaker does and breathes life into an idea.
Love is just as important as life is here and secrets being whispered into holes finally means something to me.
Posted by Andrew DiDonato at 10:36 PM