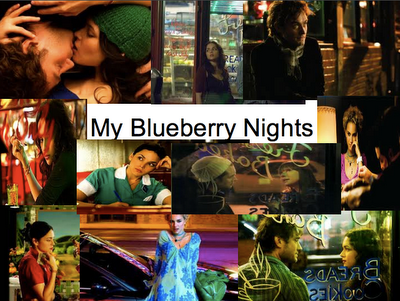 "So what's wrong with the blueberry pie?"
Although this is the first Wong Kar-wai film I've seen that wasn't shot by Christopher Doyle, the visuals are still absolutely stunning. The look of the film is simply phenomenal. It's as if Wong Kar-wai almost has this visual fetish where he just loves to play with the camera and what it could capture. So yes, visually this film is amazing. Narratively, not so much. Then again, I had heard that this was Wong Kar-wai's worst film, and yet overall, it's still a pretty okay piece of work.
I could spend some time talking about reading into food, drink, and game as a metaphor for love, but the more I think about it there isn't much there. At least to the audience, to these characters, that is all that matters. The premise of this film is that a diner owner (Jude Law) meets a girl (Norah Jones) on her way out of town and he finds himself falling in love with her after some discussions they've had on life, love, and the works. On her journey across the United States she meets a cop (David Strathairn), an adulteress (Rachel Weisz), and a gambler (Natalie Portman). This drifting girl writes to the diner owner in the hopes that she will work her way back across the U.S. to New York, where the diner is, and see him again. Although the story sounds romantic, emotions are seemingly created more through the lush imagery as opposed to the characters. Not that the acting is bad, it's just nothing to quickly phone home about.
I will have to give some credit for newcomer Norah Jones. A lot of times people praise "newcomers" when these "newcomers" have already a few credits to their name. Jones just has her singing career. It was fun to watch Law, Portman, and Weisz, but it was business as usual with them. The always amazing David Strathairn was the joy to watch here. His boozy alcoholic by night and kind cop by day who looses his grip on reality when the adulteress wife leaves him, was phenomenal to watch. I remember discovering Strathairn with Good Night and Good Luck and since then I've gone and watched his other performances and this is right up there with his best.
Similar to the actors, for Wong Kar-wai, this film does seem like business as usual. It is about people obsessed with love who listen to the same music. Sound familiar? Well, not like it's a bad thing. In fact this one has a happy ending, but there was still a problem for me, one that I've had every so often with Wong Kar-wai's work. I just felt like an outsider to these characters. The whole feeling for them instead of with them started happening to me again, but Wong Kar-wai knows when too much is too much. Like In the Mood for Love, he stops short of going over-the-top with this story, so for that, I give him a lot of credit.
Posted by Andrew DiDonato at 12:13 PM