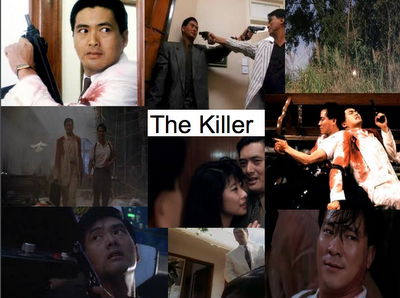 "Easy to pick up, hard to put down."
Very few filmmakers out there are like John Woo. Very few people can do what he does. I've seen Hard Boiled, Bullet in the Head, and all of his American films except for Face/Off and the one with Jean-Claude Van Damme. For me, he is the god of action movies. He understand that beneath all the gunplay and explosions that an important character arc has to be taking place, a story has to be told, and every time a bullet is fired there is an impact on our psyches. In some regards, all of his films remind me of Sam Peckinpah's The Wild Bunch and I'm comfortable with defending that comparison.
So I'm obviously a John Woo addict, but what was my problem with The Killer? I mean, on the positive side, Woo practically created a hybrid of a samurai movie meets a crime noir, the film was full of deep themes of redemption and tragedy, and there was a significant amount of badass male bonding. I could see how this inspired hit-man movies from Leon to Ghost Dog: Way of the Samurai to even the recent The American. Yet, those films were much less heavy-handed. Out of nowhere in this film, characters would force themselves to talk of compassion and peace while pausing in the middle of a shootout. The symbolism (especially in the church scene) got a little too heavy for me with the doves flying around. I suppose I'm happy it was heavy handed in the epic sense and not in the dull sense that Oliver Stone sometimes ventures into. I was actually reminded of the recent Zhang Yimou movies that I saw where the action overpowered the characters in the story. There was style over psychological depth and I can admire Woo for restraining himself (compared to something like Bullet in the Head), but I prefer plots and films that try to break new ground.
Maybe I'm spoiled by those who Woo has inspired whether it be Quentin Tarantino or Andy Wachowski and Larry Wachowski, but there is only room for improvement with Woo's other work and he showed that in Hard Boiled. Also, Woo's filmmaking is admirable for being the most pure sense of this single word- "kinetic."
Posted by Andrew DiDonato at 6:24 PM