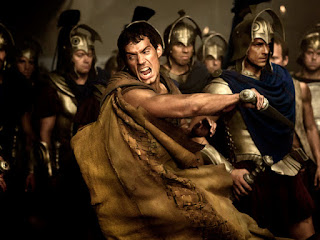 A highly stylized film of the swords-and-sandals genre that features slow-motion, muscled men, and exotic women... just about everyone whom I've talked to in person said the exact same thing, "Immortals looks like 300." They are in fact produced by the same people, but I had a bit more hope for Immortals.

I was a fan of Frank Miller's miniseries, but Snyder's film was ultimately underwhelming for me. Perhaps because the buzz I heard from friends and family made the movie out to be a lot more of an experience than what I ended up feeling after leaving that theater. Yet, I still look forward to Snyder's movies having liked two (Dawn of the Dead and Legend of the Guardians), but one of Tarsem Singh's movies definitely ranks above what Snyder has offered in his filmography so far. I'm talking about his masterful visual-extravaganza (no other word does the film justice) called The Fall. His previous film The Cell was a simple thriller with nice visuals and unfortunately Immortals is a simple epic with nice visuals.

Singh has an interesting and very unique eye, but based on Immortals, The Cell, and even just the trailer for Mirror Mirror, he seems to not be very concerned with plot. The Fall is well constructed enough that the plot is able to take a seat alongside the visuals and not feel placed elsewhere for the sake of spectacle. Immortals is practically 90% spectacle. I heard several reviewers comment that they expected just as much, and that's fine if one is content with that. I'd prefer some extra dimensions to the end product. Singh plays with mythology with beautiful art direction/cinematography/costume design/makeup/visual effects, but the narrative disappears into itself due to a script that throws neverending twists and fight sequences onto the screen again and again and again. The acting therefore feels cardboard amongst such fantastic design elements. Mickey Rourke can't seem to strike gold since The Wrestler, but Henry Cavill at least emerges as a potential leading man (the operative phrase just being "emerges").

Singh is up there with Baz Luhrmann and Julie Taymor in terms of imagining these new worlds and landscapes to place well-known stories into. Shame he can't always seem to have a script worthy of where his imagination can ultimately take him.
Posted by Andrew DiDonato at 10:50 AM