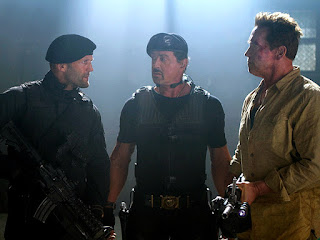 I thought the first Expendables film was a disaster. Stallone very heavy-handedly threw a bunch of stars together and created the B-movie version of a B-movie (Z-movie?). It was interesting because I talked to a friend who saw the film in a different theater than mine and he said his theater loved it. People were  clapping and laughing etc. etc. etc. My theater hated it. People walked out uttering "piece of crap" and were saying "what the hell" as the movie went on...

The idea behind these movies wasn't bad. There is a certain nostalgic factor for older audiences as well as the youth who grew up on the films of its stars. There is a new audience to be found as well of course, especially with the addition performers like Jason Statham or Randy Couture.

I mention all of this because I was concerned about seeing The Expendables 2. The trailers weren't revealing much other than a variety of action scenes, so thus the film looked an awful lot like its predecessor. It turns out that with Stallone having stepped away from the director's chair, this sequel plays more like one of today's blockbusters mixed with the sensibilities of the "old guard" as opposed to the grimey feeling of the first installment. Director Simon West streamlines the film and makes it feel more sleak than Stallone was capable of doing. It's actually a lot closer to the film I wanted to see in 2010.

Don't get me wrong, it's a stupid film, but it's a fun stupid film. The kind that I go to with friends and we laugh and enjoy ourselves. It was "an excellent piece of crap" as I heard one moviegoer call it on the way out the door. It certainly helps that I don't feel like the film was falsely advertised to me as Arnold Schwarzenegger and Bruce Willis do actually appear in larger sequences (unfortunately Chuck Norris is regulated to cameo-patrol) and the cast gels a lot better because of how fast and more refined the look and story of the movie are (which I know isn't saying much). Yu Nan, Jean-Claude Van Damme, and Liam Hemsworth are all welcome additions as well.

I'll stop my quick blurbs and sputtering by just saying that even without the subtext that films like The Avengers, The Dark Knight Rises, Skyfall, and Prometheus all had- The Expendables 2's isolationist approach to action being the story was a nice change of pace for someone who looks for what they deem to be complex material in even what mainstream cinema has to offer.
Posted by Andrew DiDonato at 2:01 PM