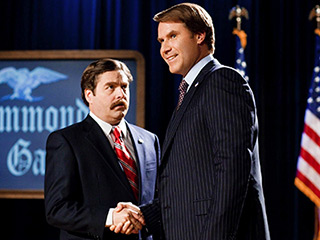 The Campaign has a lot of satire to it. The film essentially makes fun of the political process of being elected to office. It more-or-less comes across like Mr. Smith Goes to Washington as if written by the staff of Cracked.com. The film tries to mix the satire that its director Jay Roach (Austin Powers, Meet the Parents, Recount, Game Change) is more familiar with alongside the absurdity that its producer Adam McKay and co-writer Chris Henchy are more known for whether it be in their film, television, or Internet productions.

There is a slight imbalance in the *wink*wink* nature of the film alongside ludicrous moments such as when Congressman Cam Brady (Will Ferrell) posts a porno of him and his competitor Marty Huggins' (Zach Galifianakis) wife engaging in sex acts as a campaign promo. Funny for a moment, but I'm ultimately more interested by how the satire of politics being a dog-and-pony show is the film's main focus. The problem is that there is no shortage of political humor that hasn't already poked fun at what this film treats as source material (just about every week of Saturday Night Live features this sort of stuff). Ferrell and Galifianakis make it all watchable because of their sheer committment and believability in playing a slogan spouting manly-man and a emasculated church-goer respectively. A deceptively smart film, just not as funny or memorable as one would hope.
Posted by Andrew DiDonato at 6:14 PM